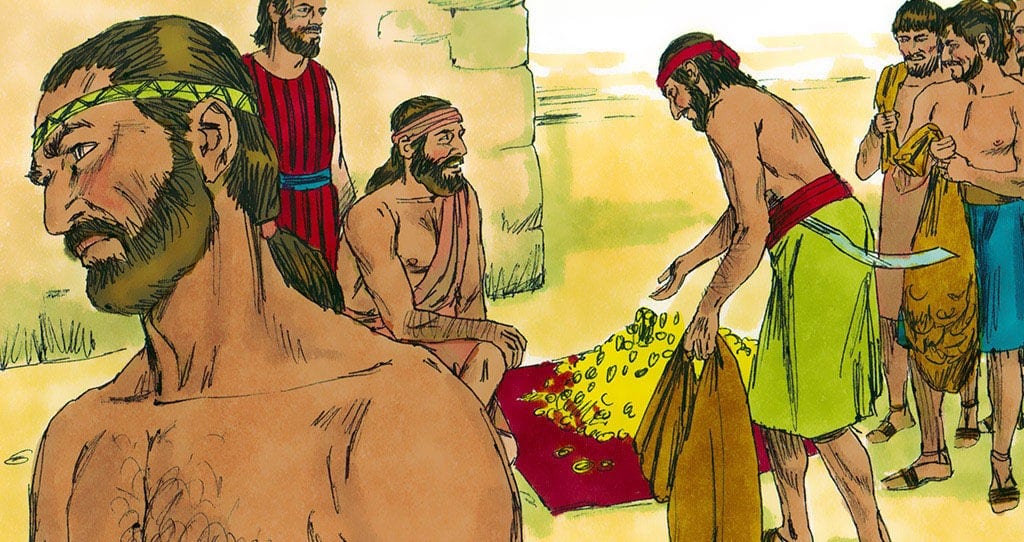 Then the men of Israel said to Gideon, “Rule over us, both you and your son, also your son’s son, for you have delivered us from the hand of Midian.” 23But Gideon said to them, “I will not rule over you, nor shall my son rule over you; the LORD shall rule over you.” 24Yet Gideon said to them, “I would request of you, that each of you give me an earring from his spoil.” (For they had gold earrings, because they were Ishmaelites.) 25They said, “We will surely give them.” So they spread out a garment, and every one of them threw an earring there from his spoil. 26The weight of the gold earrings that he requested was 1,700 shekels of gold, besides the crescent ornaments and the pendants and the purple robes which were on the kings of Midian, and besides the neck bands that were on their camels’ necks. 27Gideon made it into an ephod, and placed it in his city, Ophrah, and all Israel played the harlot with it there, so that it became a snare to Gideon and his household.28So Midian was subdued before the sons of Israel, and they did not lift up their heads anymore. And the land was undisturbed for forty years in the days of Gideon. 29Then Jerubbaal the son of Joash went and lived in his own house. 30Now Gideon had seventy sons who were his direct descendants, for he had many wives. 31His concubine who was in Shechem also bore him a son, and he named him Abimelech. 32And Gideon the son of Joash died at a ripe old age and was buried in the tomb of his father Joash, in Ophrah of the Abiezrites. 33Then it came about, as soon as Gideon was dead, that the sons of Israel again played the harlot with the Baals, and made Baal-berith their god. 34Thus the sons of Israel did not remember the LORD their God, who had delivered them from the hands of all their enemies on every side; 35nor did they show kindness to the household of Jerubbaal (that is, Gideon) in accord with all the good that he had done to Israel. (Judges 8:22-35) The people wanted Gideon to rule over them but Gideon told them God was their ruler. However, Gideon wanted to make a gold vest to place in his home town as a tribute to his victory. The gold vest quickly became an object of worship, a stumbling block to these people who struggled to know God and to follow His ways. Satan had his way on this occasion as is the case so many times. Are you a child of God or is it a matter that you just think you are? There are those who think they are saved but they actually are not. Send for our booklet, “Unsaved Believers”. It is FREE and it will help you to know, from the Bible, if your salvation is real or not.

Come and Join us